Over the last few years LEDs are becoming much more common at Burning Man. This is generally a good thing, as it means we are likely to (hopefully) see fewer glow sticks left lying around the desert. Unfortunately, most of the LEDs on the playa tend to be of the annoying blinky variety. I have decided to share my design for the fading LED circuit, but also use it to teach a short introduction to analog circuits. In the end you will be able to make something like Franziska’s hat which uses my circuit to illuminate the diffusing tubes she has sewn into her hat.

To complete this tutorial I recommend the following parts:

Our first circuit is very straightfoward, but it also will show us some basic principles for circuits. We will create a simple circuit to illuminate our LED using the battery and one resistor to regulate the current. I will be creating diagrams of these circuits using standard electronic symbols which you can find online. I will be drawing circuit diagrams using CircuitLab and simulating some of them using the circuit simulator applet. 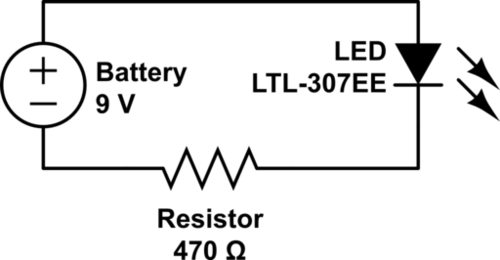 We can use the breadboard to help make our connections. The breadboard has a bunch of holes in it, and in the wholes are conductors that connect them to other holes in a specific pattern. Conductors run vertically along columns in the middle of the breadboard, with a gap in the center row (here the breadboard often has a groove). Along the top and bottom are 1 or 2 rows in which the conductors are placed horizontally. These are often used to provide power and are called power rails. The connections are shown in the diagram below.

The connected circuit should look like the image below, and if the connections are right the LED should light up. 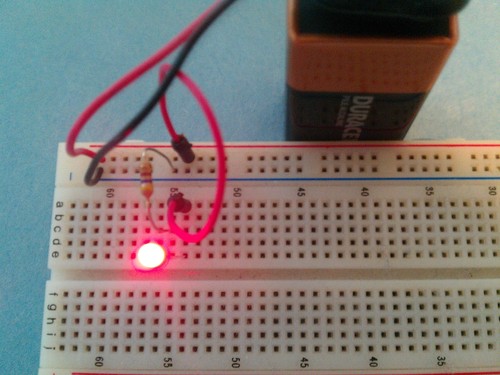 So how do we hook up our multimeter to make measurements? We will want to measure two properties in most circuits: voltage and current. Each one is measured quite differently.

Voltage is not an absolute quantity. When one measures voltage, one is measuring an electric potential difference between two points in a circuit. For example, when we say that a battery is a 9 Volt battery, that means that the potential difference between the + terminal and the - terminal is 9 Volts. Often we measure relative to a specific reference point on the circuit, which we refer to as ground, however when measuring voltage with a meter you will have to choose the two locations on your circuit to measure and the voltage you read will be the difference in electric potential between those two points.

Since we know we have a 470 \(\Omega\)) resistor, we can calculate that the current through the resistor should be

Current is an absolute quantity. It is a measure of the flow of charge past a point in the circuit per unit time. In order to measure this flow, we must pass it in its entirety through our multimeter. The way we do this is by breaking the circuit and inserting our multimeter into it. To measure the current through this circuit I will break the loop connecting the battery, to the LED, to the resistor and back to the battery and insert the multimeter in between two of the components. I do this by disconnecting the connecting wire between the +9V power rail and the LED. I set my multimeter to read current, and I get the situation below. Notice that the red wire runs only to the multimeter now, and that the current flows out the multimeter through the black wire into the LED. 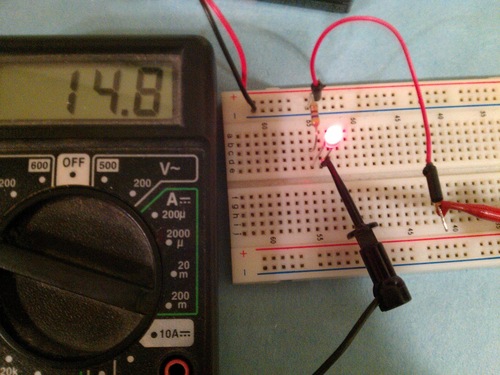 How do you select a resistor to regulate the current through an LED? You can use the relationship

So far we’ve learned how to make a basic circuit which illuminates an LED, and how to hook up a multimeter. In part 2 I’ll introduct the capacitor which will be a key component is getting the brightness of our LED to vary slowly as well as a key component in any time varying circuitry.

Part 1 of the fading hat series